Sorry for the delay between posts.... Where was I? Right, so after Copenhagen we took another early morning, long distance train ride to Hamburg. We have a really good system going by now, pack everything up the night before so we can have as much of a sleep in as possible this includes postponing make up application till I'm settled into my seat on the train!


I had no expectations from Hamburg I didn't have much of an idea about the place. When we arrived we went straight to Hotel Figaro (which if you ever find yourself staying there I will warn you has to no wifi, what the helmet), pulled out our map and plotted a walk into town.


The docks the water and the buildings reminded me a lot of Auckland but no where near as bustling which is strange as Hamburg is the second largest city in Germany. We explored the docks a little but were really tired from the travelling and early starts so we stopped for afternoon tea in a very sterile new cafe which did not make me warm towards Hamburg just yet.


After a bit more wandering the sky began to darken a lot and we ducked into a Currywurst shop just in time to miss the down pour.


After the rain stopped we walked into the central city and had a look at the shops. There are a lot of canals in Hamburg too, not as lovely as the ones in Copenhagen but perhaps if you had only been to Hamburg you would be impressed.

After looking in stores well out of my price range we went to a a Breuhaus (brew house) for a bier! a big delicious wheaty bier! I love the beers over these parts of the world.


On our way back to the hotel we stopped to check out a massive old church nearly ruined in the war with just its walls and a huge impressive spire remaining.

In search of some dinner we headed up each side of a really busy street filled with all sorts of eats. We settled on a genuine German restaurant which had the perfect amount of ambiance, delicious beers and an anti pasti platter bigger than your average dinner table... Followed by but definitely not needed, sausages and sauerkraut.


To kick Tuesday morning off we fulled ourselves well (probably not really necessary after last nights dinner but when in Hamburg!)  with coffee, juice, croissants, cheese, bread, meats & fruits.

Fuelled to the brim we set off to Explore St Pauli the hip part of town. We came across the red light district of Reeberbaun. I imagine this was absolutely bustling back in the days when this city was overflowing with sailors and whores. 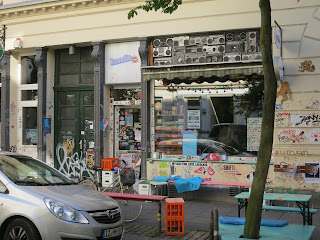 We came up on a classic car show which was quite impressive, big old Bentleys took my liking.

Heading along the waterfront towards the city centre we stopped at a man made beach bar which we had read about in the Lonely Planet. Full of cool old un matching furniture, palm trees cool views of the port, good beer... and believe it or not, Fat Freddie's Drop in the radio.


Another part of the city we explored was St George. Not a very nice part of town, full of sex shops for the dirty ship workers, homeless and just plain crazy people. We saw and old man talking to a statue, I am going to assume he is a German war vet gone a bit batty.

As we walked in towards the city centre we stopped for some grape juice, sausage and a scary encounter with a swan (why me).

Very cool shops and style here (standard for this trip I have found), after a his and hers shop at American Apparel we scanned some of the other stores then headed back to our neighbourhood for a drink in a massive old rundown room with al these old vintage couches in. We stayed in a student area so this bar seemed full of them.

Dinner was had at a German restaurant which had nothing on the night befores meal but still delicious.


Back to the hotel before, you guessed it, another long train ride to Munich for OKTOBERFEST!
Posted by Rhianon at 11:26 No comments:

The train ride to Denmark was pleasant and after travelling inter Europe by train, I don't know why you would opt to fly unless on a tight budget. It may cost a bit more and take longer but the journey is much smoother, the seats have more space, no lines, checking in or getting to the station 2 hours before departure and you get to see some lovely scenery and it is a great chance to have a nap, read a book, or make notes for your blog.


When we first arrived in Copenhagen we stored our bags in lockers at the central train station as we knew our accommodation was a bit out of town and wanted to start looking around right away. Although my first impressions were this-is-just-another-European-city, once we got amongst and started exploring, I realized it had it's own vibe going on and is a really cool place.

We strolled the streets and stopped in at a corner liquor store to purchase some Weiss beers then sat alongside the canal and drank them watching the locals walk their dogs and the tourists on their boat tours.


Our accommodation was a fifteen minute train ride out of the city center. The place was owned by an old couple and I felt like we were staying at my grandparents! Sneaking in late trying not to wake anyone up.

It was a bit of a rush back into the city as the restaurants all closed at about half 9. We decided on a little old  wooden pub for dinner despite the annoying magician doing tricks for beers also dining there.

Had been waiting for this big wiener schnitzel since my ill fated trip to Salzburg earlier in the year with Jessica where all we ate was pretzels. It was far too big which please Dom as he got to help me out.

Tuesday we trained into town and fueled ourselves with cakes and coffees for breakfast, had a quick look around the shops and then went on the hunt for the free bikes located around the city for tourist and locals to use. It took a long time to actually find two working bikes.

We headed out to Cristiania, the part of town the hippies run, where not even the police bother to patrol anymore. The little town is quite large, I think of a Splore/Coromandel town mash up when I try to describe it, lots of art made from old bikes and metal etc, lots of colour, even a green light district for all your marijuana growing needs.

After leaving the colourful, weird but oddly wonderful Christiana we went in search of The Little Mermaid  a tourist attraction I didn't even know existed until we arrived. The Author of the story Hans Christian Anderson was born here in Copenhagen.

Although Copenhagen is flat, the wind made the cycling a bit hard going, so by the time we got back to the city we were well in need of a beer stop. Whilst enjoying our delicious beer and watching the well dressed Danes, some kids tried to steal our bikes, they thought it was hilarious.


Time for a refuel, we gorged on fresh bread and cupcakes before exploring the Copenhagen Design Museum and discovered the Danes are really good designers, the rumours are true. Upon exiting, our bikes were well and truly stolen this time.


Must be time for another beer....

The meatpacking district sounded quite cool, we found a stylish restaurant where we over fed ourselves on 6.9% IPA's and anti pasti.

We set the alarms ready for our early train ride to Hamburg.